Vine diseases: Their effects and treatment 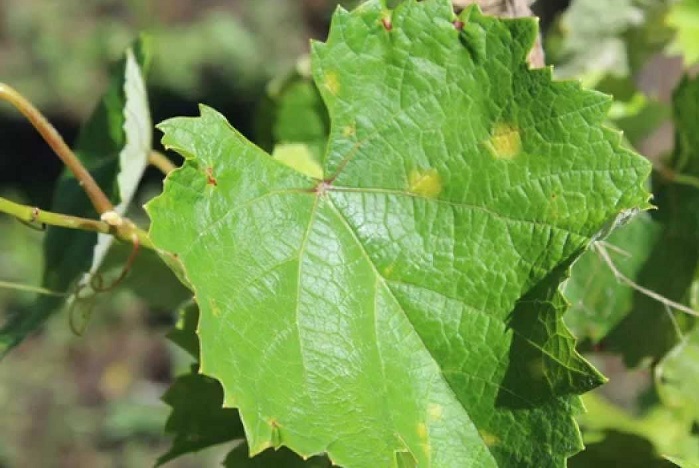 Today we face a problem that most of those who grow grapes will suffer and that is that as a general rule the vine is usually susceptible to a large number of diseases. In most cases, prevention and prior action can take away more than one headache. Learn to differentiate them and choose the best treatment.

MAIN VINE DISEASES THAT CAN PUT US IN A BIND

This fungal-type disease is caused by the fungus Uncinula necátor Burr. Due mainly to the climate that occurs in the Mediterranean area, powdery mildew is quite deep-rooted and is seen frequently, especially when temperatures are between 25 ºC and one hour between 70 and 90%.

It is, without a doubt, one of the most important diseases in vine cultivation. It is present in all the grape production areas and, above all, under favorable conditions.

A kind of whitish powder appears on the leaves that covers the entire leaf area, both on the underside and on the upper side. With time and the progression of the disease, the leaves wrinkle at the edges and curl.

However, powdery mildew does not only affect the leaves, as it encompasses all the organs in vine: stems, leaves and clusters, which causes different symptoms on them.

It produces necrosis in the epidermis, forming a net over them. It produces desiccation in vine shoots, affecting the vegetative development of the strain and reducing its development.

Powdery mildew affects more severely when there is presence of mycelium in the winter buds, which goes from budding to the formation of berries (pea-sized). If there are no mycelium in the cold season, it is important to control the progression of the disease from the beginning of flowering to the formation of berries (pea size).

When powdery mildew is endemic in a vine area, a specific program must be carried out to control it. The treatment period begins from the extended bunches (beginning of lofration to beginning of veraison) with applications of systemic or penetrating active ingredients, every 10-12 days.

Before this period, it is necessary to apply materials that slow down development or act as a preventive, such as sulfur in dusting.

In this type of disease, preventive treatments are very important to stop or slow down the appearance of the disease in the crop.

+ Treatments recommended by the Ministry of Agriculture to control powdery mildew on grapevines.

It is one of the great diseases of the vine and is well known to all the farmers who grow this species. It is also one of the most serious and most complicated to solve. It is caused by the fungus Plasmopara vitícola Berl and de Toni and, as in powdery mildew, they appear in climates with warm temperatures and high humidity.

Mildew is an internally developed fungus, so its treatment is more complicated than other types of diseases. The spores, when placed on the leaf, emit a germ tube that penetrates through the stoma and colonizes the interior of the culture.

The clear example to recognize the appearance of mildew is to observe on the leaves a kind of oil stains on the upper part. However, if we look at the underside we will not find these stains, but there will be a whitish powder. These “spots” over time necrotize and defoliate the vine.

However, mildew also attacks all the organs of the plant (as in the case of powdery mildew).

On the stems it produces a necrosis, especially when they are tender. Produces a partial or total desiccation of the stem

The problems of mildew in the bunch are the worst, from the economic point of view, the bunches separated until flowering are very sensitive to the attacks of this fungus, so a late control of the disease means the loss of a large production .

If the bunches are attacked on the rachis, they slowly curve until they dry (partially or totally). If the disease spreads to the peduncle, it can affect the entire bunch.

While the berries are in formation (pea size), the disease manifests itself with a wrinkling and its subsequent desiccation, even when there is no presence of mycelium on them (larvated mildew).

You have to detect and track spores in winter. In addition, one must be attentive to the first infections (the oily spot on the leaf), which warn of an advance of the disease.

These are the treatments recommended by the Ministry of Agriculture for the control of mildew ( Plasmopara vitícola ).

When the soil has too much moisture content, vine disease problems can arise, such as root rot. This disease is caused by Armillaria mellea Vohl and Rosellinia necatrix Hartig.

Symptoms: we observe short stems and shoots on the vine, as well as the leaves, which have also lost their characteristic greenness. The roots blacken and rot, although this measurement is not visually appreciable as a diagnosis since we would have to uproot the plant to observe it.

One possible solution is to increase the drainage capacity of the soil, whose impermeability is the source of the problem.

It is one of many diseases of the vine, although it is not specific to this crop since it can also be seen in others of a different nature. It is caused by the fungus Botrytis cinerea and usually manifests itself on plant organs such as leaves, shoots and inflorescences. Conidia have a great germination capacity between 1 and 30 ºC and need an ambient humidity of around 90%.

Symptoms: new or young shoots acquire a brownish hue that over time necrotize and die. On the leaves there are brown lesions located at the edges or at the tip. The fruit, in turn, turns brown and is covered with a kind of grayish powder.

+ Chemical treatments recommended for the control of Botrytis cinerea .

This disease is caused by the Phomopsis viticultural fungus and currently it is not as important as some of the previous cases because it needs special humidity conditions for its development (high frequency of rains).

Symptoms: dark or blackish spots appear on the leaves with a yellowish ring or border. In addition, brown necroses appear at the base of the shoots and the bark cracks easily.

Among the diseases of the vine we also have another protagonist, originated by the fungus Glocosporium ampelophagum and Sphaceloma ampelinum, and which produces often confusing lesions because sometimes the affected parts are together and other times the symptoms are isolated.

Symptoms: circular spots are produced on the leaves, the margins of which are brown to blackish. Over time, these spots take on grayish wholes and dry out. Curiously, that hole remains in the leaf, since it does not usually defoliate, so it seems as if someone had trained with their pellet gun on the vine.

Pay special attention to gray rot when the cluster reaches around 7º Brix of sugar. From here, the disease must be monitored until harvest.

Gray rot has sometimes occurred when the bunch is visible until it is the size of a pea.

A particularity of the treatment against gray rot is to wet the bunches very well, so the broth in the application of phytosanitary products must be high.

There are 3 practical methods to control the disease:

2.- Method 15-15: treatments from the beginning of flowering until 21 days before harvest, with a minimum interval between treatments of 10 days.

3.- Epi method : carry out a variety-plantation-climate-disease study to achieve exhaustive control of the disease. A complicated system to carry out and individual for each plantation.

Vine rust is caused by the Phakopsora euvitis fungus whose basidiospores tend to germinate at high temperatures, above 24 ºC and high humidity. However, it is affected by direct light, so it is common for it to appear in those crops that have not received pruning.

Symptoms: reddish spots usually appear on the leaves on the upper surface, with preference for the adult leaves. When the infection is important, premature defoliation of the vine occurs.

And, of course, we do not list tinder, a disease that, to this day, has no cure. However, there are some interesting remedies to alleviate or avoid its appearance. We present them to you in the article on vine tinder .